It was NEVER supposed to be them…

"Another great chapter is being written in the annals of the United States Army Air Forces on this day. You men are sharing part of history ... Good Luck and Carry on" ... 95th CO Colonel Chester Gilger closing statement at , Berlin mission briefing, Station #119, Horham, UK, March 4, 1944.

Field order #477 had been received at Horham, Suffolk the HQ of the 95th Bomb Group from 3rd Air Division HQ via teletype on the cold, blustery night of March 3, 1944. It simply said; "Maximum Forces will be dispatched against objectives in Berlin area on March 4, 1944".

This is the story of the first blasting of the capital of Germany by an American heavy bomber. The account was written for NEA Service by the plane’s four officers. They are: Lts. William V. Owen, Columbus, Ohio, pilot; Frank L. McAllister, Omak Wash. Co-pilot; Albert J Englehart, Chicago, navigator; Marshall J. Thixton, Corsicana, Tex, Bombardier.

AN EIGHTH AIR FORCE BASE IN ENGLAND

"When we got to the briefing room after struggling out of bed at 3 a.m. we saw the route mapped out on the wall. The target was Berlin. It was no surprise, because we had been briefed for Berlin the day before but the mission had been 'scrubbed' on account of weather."

"The thought of Berlin didn't create any special excitement. After you have been flying a few missions you don't think what the target is but how far. Berlin is a 'DP' deep penetration raid and any time you see a DP on the briefing room map you start sweating it out."

"We weren't particularly afraid. We all had been a bit nervous and wished someone else had tested out the flak first. But as the briefing went on, we found we were getting good fighter escort and the setup looked pretty good."

"We had no idea we were going to turn out to be the first American heavy bomber over Berlin. All we were worrying about was the flak and our four engines. Also for five of the crew this mission was No. 12-B --- which is what fliers call the 13th mission."

"We drew a good ship. She hasn't a name but she has been on 18 straight missions without turning back and we knew we couldn’t let her down."

'Far as the Eye Could See'

T"here was a 15-minute delay before take off because of a snowstorm and for a while we thought we were not going. Then we took off and soon were in sunshine. Even though we see little sunshine in England we were not particularly pleased to see it now. We were the wing ship and deputy leader of our division. But our division was not he first for when we got over the Continent there were B-17's stretched out in front of us as far as the eye could see. Certainly we never thought we’d end up leading the parade to Berlin. The weather turned nasty."

"Clouds were piled up as far as we could see. It didn't look as though we would get through. So the Bomber Command signaled each wing to use its own discretion about whether to proceed. Lt. Col Harry G. Mumford of EL Paso, Texas leader of our wing, decided to keep on."

"Soon the other wings started to turn off, heading for secondary targets other than Berlin. Pretty soon we realized we were the only wing still going to Berlin. Then it half dawned on us that if anything should happen to the lead ship, we'd be the first American heavy bomber over the German capital."

"Pretty soon as we ran into our first trouble ----flak--- over a city we had often bombed before. Now we really began to sweat. A little later we reached our I.P. 'initial point' and we saw what looked like a heavenly cover of P-51's. It wasn’t it until the first few had made a pass at us that we realized they were Messerschmitt 109s. Luckily none of us was hit."

"Just as we were about to swing onto the bomb run Col. Mumford signaled us to take the lead. His ship's bomb-bay doors had stuck and he couldn't bomb. We hadn't time to realize that this accident made us the first ship over Berlin. There wasn't time to think of anything except making a good run. Luckily we did. We couldn't see what was happened because of a cloud below us."

"When you're over the target even in good weather, you don't get much of a picture. There are too many other things to think about. This time it was fighters. They his us right after 'Bombs Away'. Somehow we managed to avoid being hit and started home."

"It was a tough trip back. We hit solid cloud banks three different times. For a quarter of an hour at a time we couldn't see more than a tiny piece of the lead ship wing tip. Col Mumford and his navigator, Malcolm D. Durr of Alton, Ill. Did a beautiful job getting us back. Credit for the show goes to him."

"When we broke out from the clouds for the third time we saw the French coast. There, waiting for us was our withdrawal escort of Spitfires. A lovely sight."

News Headlines - "Read all about it" 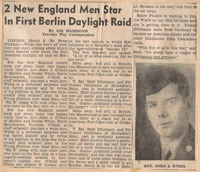 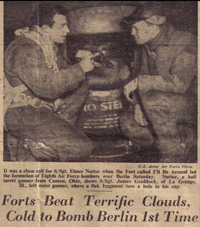